On Thursday 29th November, we learned that we have been ranked as one of the UK’s fastest growing private companies in this year’s Sunday Times Virgin Atlantic Fast Track 100 league table.

We are all thrilled about making the league table. The whole team works incredibly hard every day, and to hear that our dedication has paid off means the world to everyone here at XL Displays.

Our director, Joanne Bass, said: ““It is such an honour to be included in the Fast Track 100 league table this year.

“To see XL Displays’ name alongside big brands like Charlotte Tilbury Beauty, Five Guys, Gym Shark and Missguided is such a huge achievement and means the world to everyone here at XL.”

We are one of four companies in the East of England to feature in the list. We placed 84th, along with Huntigdon-based lightweight materials manufacturer TRB who placed 94th, Spalding generator manufacturer Welland Power who ranked 59th, and Cambridge electronics retailer Velocity Outlet who came in at an impressive 11th place.

Joanne went on to say: “It’s great to see other smaller companies making the list too – especially here in the East of England. I commend each and every business included in the table; what a huge accomplishment this is for all of us.

“Fast Track 100 is an amazing celebration of entrepreneurship in the UK and shows business people – especially start-up companies – that success is tangible.” 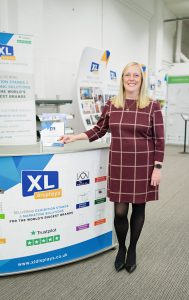 Joanne founded XL Displays in 2010, and we have since gone on to be the UK’s industry leader in pop up stands, fabric displays, roller banners and linked pop up stands.

Fast Track and The Sunday Times have been publishing league tables of the UK’s top-performing private companies for 22 years.

The Fast Track 100 celebrates independent entrepreneurs with businesses registered in the UK. Placing on the league table is far from easy given the strict criteria companies must meet, and so to make it on the list is an incredibly proud moment felt by everyone here in the office.

Virgin Atlantic and Virgin Group founder, Richard Branson, who has supported the Fast Track 100 since it started in 1997, said: “Entrepreneurs are the lifeblood of UK business and have always been the beating heart of positive change. In a climate of uncertainty, it’s more important than ever to recognise those entrepreneurs, like those of this year’s Fast Track 100, who are making the world a better place for everybody.”

Joanne said: “We would like to take this opportunity to thank each and every one of our customers, suppliers and supporters who have been with us on our journey over the past 8 years.

“This year has been one of our best years yet, and to end on such a high makes us all so excited to see what 2019 holds for XL Displays and the team.”