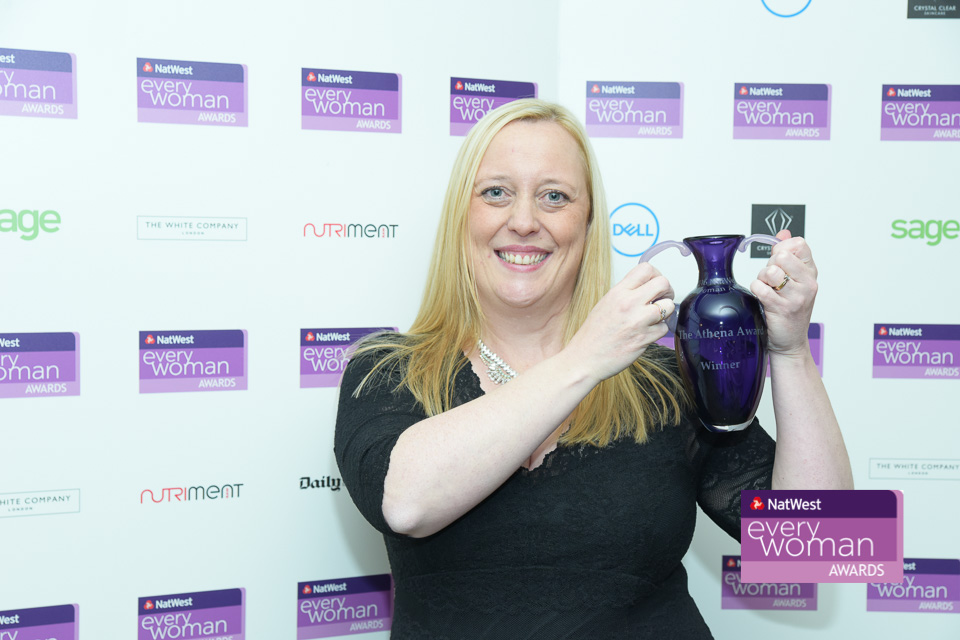 XL Displays Director, Joanne Bass, has won the Athena Award at the NatWest everywoman Awards – the UK’s most prestigious awards for the female enterprise.

The award ceremony was held on 7 December at the Dorchester Hotel in London.

The NatWest everywoman Awards identify and champion the women behind Britain’s most successful businesses. These women are the epitome of entrepreneurial excellence. The Athena Award, which Joanne won, was given to the most inspirational woman running a company which has been trading between 6 and nine years, this is a considerable achievement for Joanne and XL Displays.

Joanne saw the opportunity that entrepreneurship offered during her maternity leave in 2010. Failing to agree on flexible working conditions with her employer she grabbed the chance to set up alone offering a one-stop shop for exhibition banners, stands and design – XL Displays was born.

In five years Joanne has grown the business to a £4.2m turnover, investing heavily in a 6,000 sq ft premises complete with the in-house production facility. Starting out with a limited product range, including pop up stands, display boards and roller banners, we now offer a wider variety of display equipment as well as a custom built exhibition stand service.

Joanne is proud to have recruited and trained all her staff from the local community, including four apprentices, and credits five star online reviews to a commitment to customer service.

This isn’t the first award Joanne has won. In 2014 XL Displays won the Peterborough Telegraph’s Small Business Award, and in 2015 it won the same award along with the Customer Service Award.

Success has not come without its difficulties. Being an employer for the first time brought its challenges, and the meteoric growth of the business meant that Joanne had to learn quickly to ensure the company had the structure it needed.

Following her second born child being diagnosed with a rare congenital condition requiring multiple operations and facing post-natal depression, Joanne refused to be beaten and immersed herself in her business from hospital waiting rooms. That the company continued to thrive during this time against the odds is a testament to Joanne’s attitude and motivation.

On winning the award, Joanne said: “I am so proud and pleased to have won this award. It means so much for success to be recognised and makes all the hard work and sacrifices worthwhile.

The awards ceremony was a fabulous event, and it was a privilege to be amongst a group of such inspirational women.”

“This award will spur me on to grow and expand XL Displays in the future, and I hope it inspires other women and working mums to take the plunge into business. There is so much talent out there that needs to be recognised, encouraged and supported.”

XL Displays supplies portable exhibition equipment and bespoke exhibition stands, for more information on any of our products, please contact us or call on 01733 511030.